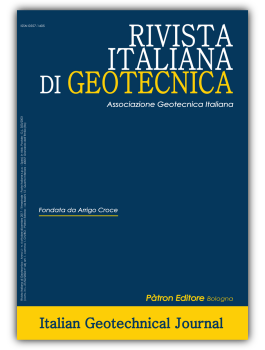 In the Report to the XXIII National Geotechnical Conference, “Forecasting and Control of Geotechnical Works” [DESIDERI and CALLISTO, 2007], I emphasized the fact that experimental evidence is and must be the starting point for theoretical studies, as well as being crucial for any comparison and verification of the validity of the theoretical models proposed. With this premise it is possible to understand how accurate monitoring of construction works and the soil or ground concerned is a valuable tool that can provide ideas for the study, understanding and modeling of these phenomena. I have always been fascinated by experimental evidence, be it in the laboratory or on site, so that for me any interpretation of data is always the challenge of being able to discover, understand, define, and model the physical PHENOMENA that the measurements relate. Monitoring selected slopes of the Tuscan-Emilian Apennines, with their related issues of deformation and gravitational sliding, is a central part of the conference. The construction of a major enterprise, such as the “Variante di Valico”, in fact required extremely accurate and widespread monitoring. This yielded a large quantity of data and therefore an important opportunity to study and explore questions regarding the interaction of tunnels along the slope. Two PhD theses were dedicated to the theme of the slope tunnel interaction, using the monitoring measurements of the “Variante di Valico” [D’EFFREMO, 2015; SCANDALE, 2017]. These theses will be referred to and advised for further consultation. To conclude this conference I will also focus on the interpretation of experimental results from projects of a completely different nature, but which once again highlight how the observation of behaviour is the cornerstone from which to start building mathematical models of the representation of our physical reality. The many years that it has been my task to spend representing, analysing and interpreting measurements from monitoring the tunnels of the “Variante di Valico” along the Florence-Bologna motorway, have led me to analyse the complex phenomena of interaction that arise between tunnels and slopes already at the construction phase and that continue during the lifetime of the construction. An initial key aspect of the interaction referred to concerns the displacements that tunnel excavation can produce on the slope. The issue of displacements induced by the excavation of a tunnel, particularly for the construction of tunnels in flat areas, has been extensively studied. Under simple conditions of a horizontal level ground both the subsidence as well as the horizontal soil displacements and deformations have been amply described and analysed [PECK, 1969; PANET et al.,1982; O’REILLY et al., 1982; BERNAUD et al., 1992; POTTS et al., 2001; GRAZIANI et al., 2005]. Fewer studies have been dedicated to the more complex conditions of a slope [WHITTAKER et al., 1989, SHU et al., 1992]. It is precisely for these conditions, and the analysis of the monitoring measurements obtained during the excavation of one of the tunnels of the Variante, that will allow us to make a further contribution to this topic. In this context, it is of particular interest that one of the slopes crossed by the tunnel was characterized by the presence of a quiescent landslide and that during the excavation phases there was a temporary reactivation of the gravitational movement. It is not my ambition to provide a complete and exhaustive picture of these phenomena regarding tunnel interaction, but I will try to highlight some relevant aspects of the slope movements produced by the excavation of a tunnel, showing how these studies, born from problematic aspects of the measurements made, can contribute to a better understanding of the phenomenon. A further important aspect of slope tunnel interaction is the one regarding the study of the effects produced by the movement of a landslide mass on the lining of a tunnel that passes through it. Also, with regard to this aspect, monitoring data measurements reported by KORONAKIS et al. 2004, were the starting point for simplified analyses of the problem whereby it was possible to highlight the main characteristics of this interaction. Here too, without pretending to provide a full-scale and allembracing overview of the interaction phenomena, the results of some mathematical models created to answer the questions raised by the monitoring data measurements will be shown.